Hey there Helpers , It’s been a Long run for Help Force in the Army Community and many of you have participated , Enjoyed yourself to the Fullest of it. But there’s questions in everyone’s mind always.

We , in this post would be seeing their answers along with some Important Statements from the Help Force Leading Team.

So , the First thing we would be looking on is the Army League of Club Penguin Online along with it’s various armies and how it acts :

The League has always claimed to be Unbiased , It has created many debates within Army Leaders in the past , but none of it has ever affected anything.
The Thing that pinches everyone the most about the League is how it favors an army : To be Specific : The Pirates , in the CPO.

P.S : This is not a Hate Post for anything , It’s just to enlighten you on what’s going on and what exactly Happens.

Question : How is it Biased ?

1. Every Army in CPO , works hard to gain Recruits , They use their time , Army Spirits and put everything at sake for Gaining new Members. While on the other hand , The Pirate army has the Privilege to Post their Chatroom Invite in the Biggest CPPS , Club Penguin Online , Which has got more than a Million of Discord Users. << This is what is called “Fair”.
Facts : 4600 Members , 1 Invite Posted , 5100 Members and it never stops , Because the Invite is still in there , Seen by Everyone in the Discord.

2. Coin Benefits << Even though that is nullified due to Membership Benefits in OG CPA.

Debates in the Past : 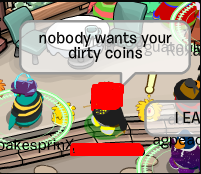 What is the Point of being in a “League” where we all know everything is One Sided ? A League is where each one of us can feel the same , The Same resources given , the Same Opportunities , Not like this , what’s happening right now ? Ask that you Yourself .

What can be done ?

As it was told , Many People including myself have tried to talk about this , but nothing has ever worked. So 3 Months earlier , we took a decision to Not Follow the Server Map of the Club Penguin Online Army League , due to the Bias decisions taken by it. As this still has not been fixed :

Elpiojo [HF First in Command] :
Armies… All meant to be a community inside a community for people to hang around, have fun and enjoy doing activities together. Sometimes armies want to show their power and that’s good. But when the patriotism and the thought of superiority takes control of it, results in toxic consequences. That is, of course, the actual case of the Army League of CPO. It has never been fair for any army, just the one army having every benefit. Fair play? Same opportunities for everyone? Don’t think so. Have a lot of hype, get a lot of people to come to an event, for what? For all to be gone to waste, since it’s been rigged from the very start. Therefore, Help Force will be refraining themselves from participating in further activities organized by the Army League. We’re all tired of the biased situation of it, unless a real solution is provided we are no longer going to waste time nor effort in pointless activities that won’t have the same benefits for everyone.
In the end, what’s the point of being so toxic? What’s the point of hating the other person being in another army that doesn’t share the same ideals with you? We’re all “penguins” no matter what. Hate the conflict, not the person.

Spotty [HF First in Command] :
As you’ve probably gathered by reading this post, the army league isn’t fair to the majority of armies. In wars you don’t see one side having a major advantage over the other side. However this isn’t the case for the army league of CPO. All the armies within the league spend hours recruiting in game, and then some armies can just do whatever they want and recruit anywhere. I’m fed up of seeing our troops feel defeated after all the hours of work we put into recruiting. What’s the point of having an army league if not everyone has the same opportunities? There’s no point of us joining all of these tournaments, getting our members hyped when the whole league already knows the result. We are tired of participating events where everyone isn’t equal, it’s just pointless.

The Statement : Until this Situation in the Army League is not fixed , The Leaders hence have decided that : We would NOT Be taking Part in any Tournaments , Cups hosted by the CPO Army League , Along with disregarding the Server Map , Totally.