Hey there! Welcome to the HF Insight, or HSI for short! Last week The Help Force went under new leadership and we are so excited to talk about it!

The HF Insight will be about the previous Weekend along with the following Week. (i.e. Saturday-Friday) Click read more to read the full post about this week’s events!

We were welcomed by the new leaders with an HF Resurgence event! This event took place 3-4 days(depending on your time zone) after the new leadership began. This event showed us how amazingly well our main leader Moon is capable of leading. We saw that she had complete control over the army seeing that it was her first time hosting as a leader! Since we had 3 new leaders overall, the lead for the event was split into 3 for the whole event, starting with Moon leading in town. For every room change, we had a different leader.

Our second leader was DaSwagger. He did amazingly well overall. Heck, he did so well the whole time, I was flabbergasted by his leadership skills. I’m saying words I didn’t even know I knew! Swagger took us from the Town to the Snow Forts.

Our final leader for the event was Juanita. She has been a long time mod for the HF. It was so long that when I joined the HF she got promoted to a marshal a month later. ( I joined in March 2019). We were so proud when she became a Second-in-Command Leader. She also has amazing leadership skills which lead to her part of the event going very well.

We maxed a little over 30 over the event. Now if these aren’t leadership skills, I don’t know what is. Believe it or not, we even got 20+ new recruits on the server just that day. Learn more about the event by clicking here

The day started off with a fun event announcement! Not 1 fun event but TWO!! These fun events for the day were For the [AUSIA] and [US] Divisions!

The event was hosted by one of our AUSIA Leaders DaSwagger. We were a small group of people so the event went very fast and well.

Side Note: DaSwagger is VERY confusing.

[US] Hide and Seek Tournament

This event was so great, there ended up being 2 rounds (by popular demand) which lasted a total of 2 hours and a few minutes.
*Information By Moon

Monday started off with the [AUSIA] Skribbl.io Tournament Announcement.
The event was hosted by one of our AUSIA Leaders DaSwagger. We had 12 people join us for the event, with a few of them from the dynasty!

Side Note: Swag’s excuse for not coming first: “My GaMe WaS lAgGiNg JaYdEn”

The start of the day for [AUSIA] was met with an impromptu skribbl.io event that was hosted by Moon.
1st Place: @genniepurple
2nd Place: @maya
3rd Place: @Moon

An announcement was made for an event held for [EU] division. The event was a Stamping-Event. It was hosted by Moon.
We maxed 26+!!

Side Note: Moon was sick and nobody wished her well. (Do that next time, smh!)

The day started with an announcement from our wonderful leader! It was for the [US] Division for a Dance Party hosted by Moon. We maxed 40+, making it the best event of the week.

Side Note: Moon is doing better now! But I’m still upset at those that did not wish her well.

The day started with an announcement of a Trivia Event for the [EU] Division. It was hosted by Juanita. We had all Alberts win!! 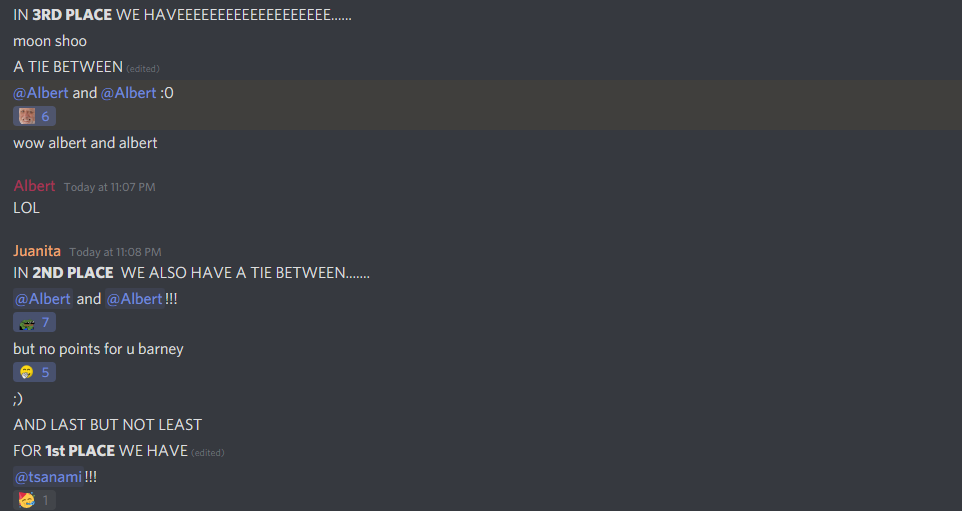 Happy Valentines Day!
No event was held in order to prepare for the JTS event scheduled for Saturday!!

That does it for our event breakdown!! We are so excited about this week’s GoTW as there have been so many fun events and segments giving you lots of points! So while we wait for that GoTW, we interviewed a previous time’s GoTW!

This is the segment where we interview a previous GoTW! This week, we got a chance to interview Penelopea, a long time helper!

Jayden91468: Hey there Pea! I’ve heard that you were the GoTW a few weeks ago

Jayden91468: Ooooo, if you can remember when was it?
Penelopea: I think it was about.. 2 or 3 weeks ago!
Jayden91468: oh, that’s very recent! How long have you been in HF?
Penelopea: Yeah! Since July last year if I recall correctly. Took me a while to get GOTW lol
Jayden91468: it took you some time for sure… I’ve been here longer and have not even gotten close!
Penelopea: Yeah smh that’s sad
Jayden91468: What is your current rank by the way?
Penelopea: Second Lieutenant
Jayden91468: Oh wow it seems that you are high up there huh! How does it feel to be a GoTW?
Penelopea: It feels pretty nice, the role, GoTW card, didn’t get my command though rip

Jayden91468: oh that sucks… what was your command going to be tho?
Penelopea: a pun of course! hope you have a hap-pea day!
Jayden91468: LMAOOOO
Penelopea: hehe
Jayden91468: well thanks for letting me interview you! It’s been great chatting with you
Penelopea: No problem lol, It’s weird being interviewed tbh, don’t know what to say really lol. And you too!

This is the segment where we interview a helper that has gained the manager role in the past few weeks! This week, we had a chance to interview Dlark, a new member of the HF family, that has been getting a new rank almost every day!

Jayden91468: Hey dlark! I see you recently have gotten promoted to Managing Officer, How does it feel?
Dlark: It feels crazy, to be honest. I only joined HF about a month ago so this still feels really new to me. I was really active and it paid off!
Jayden91468: Woah, 1 month! that has got to be a new record I think
That kind of gets rid of my next question tho…. how long have you been in HF and CPR

Dlark: I can say that I’ve been a CPR member for about 430 days. So, over a year!
Jayden91468: That’s a really long time, let’s hope you are in HF for that long haha.
Anyways, what do you feel like doing for the army now that you are an event leader?
Dlark: I’ve been definitely thinking of some events that I can run. I’m thinking of my first event being a stamp session, but that might be a little bit further down the line. College has been taking up a lot of my time so whenever I have a break in work I’d definitely like to host some events.
Jayden91468: That seems fun(other than the college part)
Well, how long do you think it will take till you get to major?
Dlark: I’m not so sure, but I’m hoping within the next few months! I’m trying to be more active and participate in events when I can, so I’m hoping sooner rather than later.
Jayden91468: Well, we are looking forward to seeing you around!
I heard you are an author as well? What is it like, writing for HF?
Dlark: I just recently finished my first article for HF, I’m hoping to get it posted soon! I’ve loved writing since I was young so it’s good to put it to use somewhere. I have a lot of ideas for articles in the future.
Jayden91468: Wow that’s great, I’m so looking forward to having a collaborative post with you!
Dlark: Me too

Jayden91468: Well that answers all my questions, thanks for participating!
Dlark: Thank you for asking me!
Jayden91468: I hope to see you soon!
Dlark: You too!

Thanks for joining us at the start of the new era! If you are new; Welcome! and if you are an old member, thanks for sticking with us! Join us next Friday when we do a wrap up of the upcoming JTS Event in honour of Juanita’s spelling!

Sorry if the insight was too long! since this is the first issue and the first week of new leadership, it was a little stretched out. Expect a much more clear and better-made post from next week!

But for now, Unleash the power of helping, and Waddle On!